You know, I've been pretty zen about this whole lockout thing all summer.  I figured that there's not anything I can do to prevent it from happening, so I didn't bother wasting my time worrying about it.  Sure, I've followed along with the news, but I've been more or less pulling back from hockey in general since the major free agency deals went down.  I looked at this as sort of an inevitability that was looming in the distance that I was just going to have to cope with.  I didn't have any anxiety leading up to today, but I also didn't have any hope.  I just kind of ignored everything.

But then midnight came.  The thing that hit me as I watched the clock was that sense of inevitability that had accompanied this lockout from the beginning.  I knew it was going to happen.  Everyone did.  Not once at any point during the negotiations this past month did I feel like there was a chance of an agreement.  There was never any hope for a reasonable settlement.  And I got angry.  More angry than I ever was in '04-'05, which is surprising because I've mellowed out a lot in the last few years.   During that lockout, I coped by watching an array of hockey movies and my Wings DVDs as I anxiously anticipated the return of the game I loved.  I eagerly read every article about the negotiations hoping against hope that there would be good news.  I was devastated when the season was officially cancelled, even though I knew it was going to happen.  I still slept in my giant Wings t-shirt and wore my various shirts and hats around campus.  But not this time.

This time, I stormed out to my garage and found the first empty giant tub that I could get my hands on.  (This is quite impressive because it required scaling a mountain of boxes and a couple of bags of hockey equipment.)  I went up to my room and cleared out every piece of Red Wings apparel that I could find.  Every Wings t-shirt, pair of PJ pants, sweatshirt, hat, scarf, jacket, and even (to my mom's great offense) the purse she bought me last year.  The only thing left in my room is my autographed Yzerman jersey because Steve Yzerman is still special and it got a special dispensation.  My Wings/Tigers t-shirt blanket also remains, but that will only be displayed Tigers-side up from now on.

My clothes-packing fit was briefly interrupted by my mom calling me crazy and (correctly) pointing out that I was going to need another tub.  It would seem that no matter how much I sat on the lid, one 18-gallon tub just wasn't going to cut it.  At that point it also occurred to me that I might have some issues with being a Wings merchandise hoarder, but that's a problem to tackle on a different day.  Once I made another perilous trip to the top of the pile of tubs to retrieve a second tub, I packed the excess into that.  Then went back upstairs and made a second sweep of my room.  I found a few stray shirts that had escaped the first pass and then, since I had plenty of space, I grabbed some of the other memorabilia.  My autographed pucks, several car flags (How on earth did I end up with 5 of them?), calendars, and anything else that wasn't particularly breakable got tossed in the tub too.

My mom thinks I'm a raving lunatic because of this, but I think it's a perfectly reasonable response.  If the NHL is going to have another lockout, that's its business.  But I will not be wearing any of its merchandise or spending any time thinking about it in the meantime.  If/when hockey comes back, I'll watch.  The tubs will be pulled out of the basement and clothes put back into circulation.  I know I won't be able to stay away, and any threat otherwise is hollow.  But until then, you won't see me wearing anything hockey-related.  I won't be writing about it.  I won't be reading about it.  I've got plenty of other interests that can take up my time.  I've got the Tigers, the Wolverines, a dozen lifetime's worth of books, and a whole boatload of British tv to pass the time.  I think I'm going to be just fine.
Posted by Kris at 1:42 AM 1 comment:

The gloomy skies over metro-Detroit today were pretty fitting for the mood that anyone who loves hockey was in today. We all knew that it was going to happen eventually, but nobody was ready for it to be so soon. I'm young enough that I don't remember a time when Lidstrom wasn't a Wing. I was just starting kindergarten when he first donned the Winged Wheel. He and Homer were the last two players remaining from what I refer to as the “glory days” – those great late '90s and early '00s years when the Wings were truly a dynasty – and I have a strong suspicion that Homer's on his way out too. I think this is what it feels like to be old.

As depressing as Lidstrom's retirement is, mostly I'm filled with a sense of gratitude. It's hard to put into words how lucky we were to get to watch him play night in and night out for all of these years. The odds of the league seeing another defenseman who is as far above everyone else as Lidstrom was are slim to none in our lifetimes. And we got to watch him play almost every single game. (Seriously, his lack of injuries is incredible in and of itself.) I was lucky that I got to be in the stands at the Joe when he scored his first career hat trick a couple of years ago. I was even luckier that I got to be there this April when he played his last ever game on home ice. When I headed to the rink with my friend that night, my biggest fear (for the first time ever) wasn't that the Wings would lose the game. It was that that would be the last time I ever got to see Lidstrom play at the Joe. Both fears came true in the end, but at least we got a chance to say goodbye. 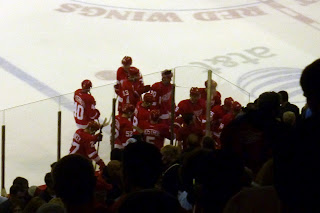 His last moments on the ice at the Joe.

Lidstrom was a hockey fan's kind of player. New fans who have just been introduced to the game tend not to appreciate his talent. Casual fans are drawn to the flashy offensive plays or big hits or dramatic saves at first glance. It takes a certain hockey savvy to really get how good Nick Lidstrom was. A couple of years ago, someone recommended that the next time I went to the Joe, I should spend one shift not watching the puck, but watching just him in order to fully appreciate how he played the game.

There's a huge, gaping hole in the Wings' lineup now, and no matter who Ken Holland signs, it won't fill it. You don't replace Nick Lidstrom; you just try to compensate as well as you can. On the bright side, it should be an interesting summer since the Wings have more cap space to play around with than they've ever had. All the free agents in the world won't make losing Lidstrom any easier, though. Here's to #5, the best we'll ever see.  Thanks for being perfect.
Posted by Kris at 10:38 PM No comments: 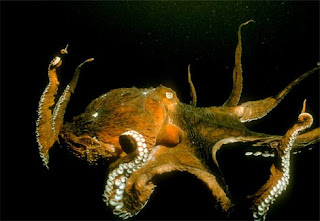 Something to lighten the mood: 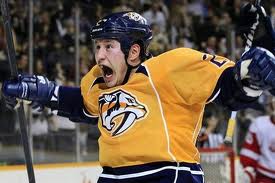 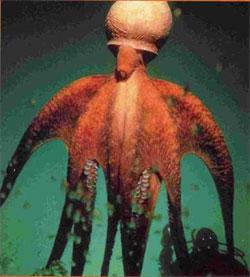 I'm not even going to bother with this one.  I picked Mule last game.  If I weren't in charge around these parts, I'd have to fire myself.


Something to lighten the mood: 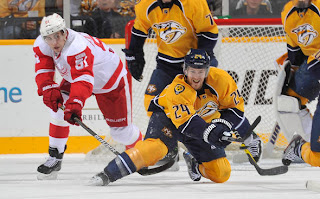 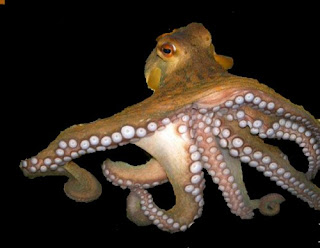 
I'm picking the Mule for this one.  He's clearly riled up about the last game, and it sure would be nice for him to enter his playoff beast mode sooner rather than later.

Something to lighten the mood: 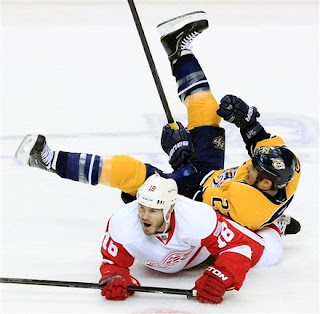 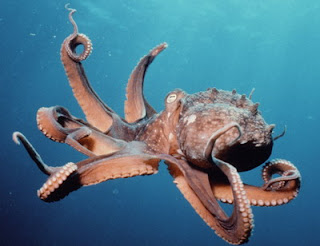 
Henrik Zetterberg.  I know...choosing him is kind of a cop out because, well, he's Henrik Zetterberg, but I think he's going to have a good night tonight.  I keep harping on it, but he tends to be at his most dominating when he's feeling feisty.  And he should be, after Weber's cheap shot that went unpunished for all intents and purposes ($2,500 from a multi-millionaire is like telling me that a speeding ticket is going to cost me $1.)


Something to lighten the mood: 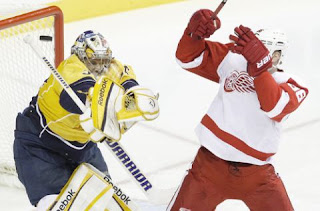 Dance party!
Posted by Kris at 1:00 PM No comments:

Kris
I can't remember a time when I wasn't obsessed with the Wings and hockey in general. They are the great defining obsession of my life. Steve Yzerman is, and always will be, the hockey love of my life. I'm a graduate of both MSU and UofM (it's a long story), and will be living in the fine, fine state of Michigan for as long as I can hold out. I also contribute to Chicks Who Give A Puck and The Fourth Period.

View my complete profile
Love it? Hate it? Want to give me a piece of your mind? Let me know at:
snipedangle [at] gmail [dot] com

I can also be found on Twitter at @CWGAP_Kris.

You Should be Reading: